The challenges of migrating our media assets management system

My team at Canal+ is building a new media asset management (MAM) platform. To put it simply, Mediahub, our platform, stores video files and information regarding these files:

On top of storing and exposing tools to manipulate video files and their related metadata, Mediahub allows third parties to send us new video elements and users to ship these elements to VOD platforms and TV channels. A built-in workflow orchestration engine takes care of receiving, quality-checking, assembling and shipping footage. The platform can execute hundreds of these workflows concurrently and treats more than 3000 workflows a day.

The Mediahub project is born roughly in 2017, but Canal+ has been a leader of pay television, film production and film distribution in France for decades, meaning a vast proportion of the video footage we manage comes from a legacy system. Out of roughly 1M medias we are managing, 900K come from the old system; a system we are trying to slowly replace, using Kafka, Scala, and functional programming as our main tools.

In this series of articles, I will explain why we are moving away from that legacy system and how we are doing it. I’ll go from a big picture of our architecture (ETL pipelines built on Kafka) to some neat implementation details (using Cats to validate and transform loosely structured data), in an attempt to showcase how Kafka, Scala and functional programming allow us to modernize our internal video management tools.

Why we are moving away

The media management platform (MAM) is at the cornerstone of our video supply chain: it is used by a thousand users daily to provide content to a hundred distribution channels across the globe. Since 2011, in virtue a contract between Canal+ and a software vendor, the role of MAM is performed by Edgar, a closed-source, monolithic program built on a long-obsolete foundation.

Our main concern with Edgar today is the impossibility of reshaping it to address new needs:

At best, adding these changes to Edgar would require another expensive contract with a third-party vendor. And that is if they’re possible at all. Rather than throwing money to maintain a 15-year-old piece of software, we’ve decided implement ourselves our MAM for the decade to come.

Replacing such critical software requires time, effort, and a thoughtful approach. Here are some of the things we need to consider:

The building blocks of our architecture: Scala microservices and Kafka topics

While Edgar was a Java monolith, we’ve taken the opposite approach and built Mediahub as a distributed system, made up of 120+ microservices, the vast majority of which implemented in Scala.

While distributed systems are notoriously harder to implement and maintain (notably regarding data consistency and infrastructure, this approach as allowed us to handle some of the hardest challenges of migrating a critical system.

In particular, this architecture allows to segregate legacy-specific services, which only exist to serve our transition from one platform to the other, from broader and more durable services. Indeed, Mediahub is a connected system: connected to the legacy software, whose data needs to be replicated in real time as long as it is running; and connected to external systems (third-party APIs, subsidiaries of the Canal+ group etc.) with which we need to interact. Interacting with these services requires specific code and the microservices architecture lets us separate that code from the rest of the system. Of course, even a monolith should clearly separate concerns, this isn’t something you can’t achieve without microservices; but there’s one question that a modular architecture answers very well: “What if I don’t need that anymore?”

We’ve found that being able to decommission parts of the application is just as important as adding parts to address new needs. Delivering to our users a smooth transition from the old system to the new one is crucial to our business; and the best way to achieve it is to have loosely coupled services that we can take out of from the system at any time, with little or no interruption of service.

Dividing the application into microservices forces us to be more conscientious about separation of concerns. We strive to keep a service’s boundaries small and its knowledge of the outside world limited. We ensure that services don’t know about one another, and thus don’t call one another directly, unless necessary.

A service whose only goal is to manipulate data from the legacy may depend on a permanent, broader service, but never the other way around, as our ability to decommission legacy-specific services lies in the fact that no other service depends on them.

While especially crucial for this whole legacy transition, this principle also applies to more permanent parts of the system. It isn’t uncommon for a service to apply business rules in reaction to an event in another service. In this scenario, the service that provoked the event emits a message in a Kafka topic. The message will be consumed by other services without the original producer’s knowledge. When a chain of services emits and consumes events that way to produce a distributed transaction, we call it a choreography, but will discuss it later.

Kafka topics are essentially partitioned and ordered collection of events that have multiple producers and multiple consumers within a system. They are not only useful for propagating events across loosely coupled services; they enable us to build large ETL (extract, transform, load) pipelines, to move massive amounts of data from the old system to its successor. Kafka is a distributed streaming platform. Streams let us reason about data emitted over time: they give us a declarative and composable way of handling massive — possibly infinite — amounts of data, which are modelled as successive and bounded sequences of elements called chunks. 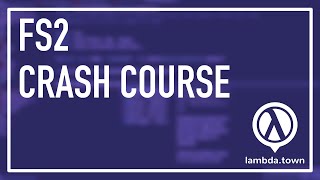 In a video about a year ago, I’ve shown how fs2, a popular streaming library for Scala, could easily be used to transform a CSV file of several gigabytes using limited memory. Despite being very powerful, fs2 itself can only model data flowing within a single JVM, and not across services; but Kafka lets us apply what we know and love about streaming to build pipelines that spans multiple services, and still retain the same essential properties:

Kafka also gives us the ability to observe what’s going on between our services: we can monitor ETL pipelines, identify bottlenecks and be notified when a service is unusually slow. The main metric we use is the lag, the number of messages that has been produced but not yet acknowledged by the consumer. We can watch this lag using tools like akhq and Conduktor, and event receive notifications in Microsoft Teams when the lag is abnormally growing.

While Kafka can be used with a variety of programming languages using client libraries, we’ve chosen to implement the vast majority of our services using Scala, a statically typed, functional programming language that runs on the Java virtual machine (JVM). When replacing a legacy system, and moving all the data that goes with it, we have to:

In short, make it correct and make it fast.

Regarding the make it fast requirement, Scala is a great candidate for implementing heavy applications thanks to its excellent support for concurrency. The Cats Effect library provides a high-performance runtime that lets us build massively concurrent applications. This runtime provides Fibers, also known as green threads, a threadlike abstraction that is dramatically lighter than JVM threads.

The number of available JVM threads in an application is inherently limited by their heavy nature, but fibers are so lightweight you can reasonably spawn millions of them. Fibers allow us to organise work into semantic units of computation (e.g. one unit per HTTP request in a server), and let the runtime decide how to map these computations to real kernel threads.

Cats Effect makes it remarkably easy to turn a sequential program into a parallel program:

In this example, the HTTP calls are sequential. (Don’t worry too much about this IO thing for now). With a single change on the last line, I can turn them into concurrent HTTP calls, thus greatly improving the speed of the program.

Cats Effect also provides concurrency primitives such as queues, atomic mutable references, semaphores, resources … Using it as our concurrency toolkit as enabled us to write performant services with ease. That’s it for the make it fast part, for now. How does Scala help us make it correct?

As a statically typed language, Scala can rule out entire classes of bugs such as null pointer exceptions, and reject incorrect or indeterminate behaviour. As pointed out by Li Haoyi in his article Why Scala?, Scala’s type checker is able to catch the vast majority of the most common bugs in a dynamic language such as Javascript.

Scala’s type system also allows us to model errors as core members of our domain, and distinguish technical failures from errors in our business logic. The latter can be exhaustively checked by the compiler, which will prevent us from forgetting anything. Here’s for example how the compiler would remind me of a missing implementation for a state of the application:

I’ve written a fairly long article about asynchronous error handling in Scala if you feel like diving in the details. Here are the key takeaways:

Besides the additional safety, having a powerful type system at our disposal lets us precisely model our domain with two goals in mind:

I’ll cover these aspects in more detail when I explain how we parse and validate the incoming data from our legacy application. Until then, here’s a sneak peek:

With support for sum types and product types — known together as algebraic data types — Scala lets us express that Essences, the fundamental pieces of data that make up a digital asset, can be:

By modelling the data this way, we tell the compiler that Essences can only be one of these three things, and prevent nonsensical combinations such as a video without a resolution, an audio track without channels, or a subtitle with an audio format. Moreover, when dealing with values of type Essence, the compiler can enforce exhaustiveness thus preventing indeterminate behaviour at runtime.

Notice also how the audio channels of an audio essence are modeled using a NonEmptyList. As the name suggests, a NonEmptyList is guaranteed to have at least one element. Restricted data types like this one are used to reject illegal values as well as to make the complex domain model that is media management a bit more approachable. While we can always check if a list is empty at runtime, promoting this constraint to the type level reduces human errors and decreases the number of tests we need to write for our software.

Overall, Scala’s type system, paired with some neat libraries such as Cats, brings us closer programs that are correct by construction.

Coming up next: the details our ETL pipelines

Let’s recap: Canal+, a leader of pay television and film distribution, is rewriting from scratch a major component of the video supply chain. This implies moving massive amounts of data from the old software to the new platform, which, in turn, implies many challenges: how to build a more flexible media asset management platform ?, how to feed content to this new platform?, how to transform data from one platform to the other? …

More generally, the questions that we ask ourselves as a team are

None of these questions are entirely easy to answer, but they’re made easier by our choices of architecture: we’re building Mediahub as a distributed system, implemented in Scala and backed by Kafka. This gives us the confidence we need to build a platform that will be the cornerstone of our video supply chain for the next decade.

Now that I have motivated our transition from Edgar to a new platform and introduced the main technical choices that make this transition possible, I can explain how our ETL pipelines work in more detail.

This will be the subject of the next article; until then, take care!